WE CAN SHIP ANYWHERE! 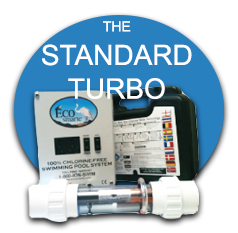 The Standard Turbo handles up to 50,000 Gallons, you can select "IONIZE" or "OXIDIZE." The Standard Turbo generates low DC voltage amperage to electrodes and the unit AWLAYS remains in oxidize, unless copper ppm fails below 0.4 ppm! 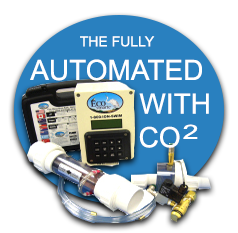 The Programmable Turbo handles up to 50,000 Gallons* comes with a digital display to FULLY automate your EcoSmarte pool with CO2 PH control.  The higher daily bather loads require additional equipments and installs to 50,000 gallons. 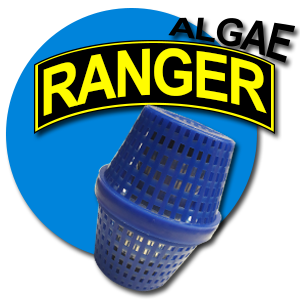 Crystal Clear water and less chemicals used. This device will help keep your pool cleaner and safer than just chlorine alone! Simple to use and effective on all types of Algae. You can reduce the amount of chlorine you use.

Salt system owners will love the added benefit of the descaling effect it has on the chambers! Also, prolongs the life of your equipment! Saves you money by needing less chemicals to help maintain your pool and it saves you time that you would normally spend dealing with the fluctuations of chlorine especially in our hot sun!

We Use Glass Pack Technology

An average sand filter can catch particles as small as 100 microns. A good cartridge filter can catch particles as small as 40 microns. Dead skin and blood cells are smaller than 9 microns. ECOsmarte® Recommended Filtration In addition to filtering skin and blood cells, Glass Pack® when used in conjunction with ECOsmarte's Oxygen Technology will remove chloramines, nitrates, ammonia phosphates, iron, manganese, and filters giardia cyst and 75% of the bacteria known to man. Glass Pack® is another environmental and health technology brought to you from ECOsmarte®. Installed at ECOsmarte pools across the United States. Glass Pack® works great!!! Order Today